The ActionScript prototype is an interface for the physical game MathsFun. MathsFun is an interactive game that makes it fun for kids to learn basic Maths skills. The concept of the game did not change and is available in this post.

The purpose of the prototype is to test core functionality of the game that influences user experience and interaction.

I've picked 2 most risky UX/game logic hypothesis for the tests:

Hypothesis #1:
Increasing game complexity in sets of 10 questions will sustain kids interest in the game and make it fun.

Hypothesis #2:
On average it will take a user 3 - 5 seconds to respond a question. If it takes more than 5 seconds - a user is unlikely to provide a correct answer at all and there is a need to change the question or provide support/positive reinforcement.

The first screen a user sees - is simple. A simple Math question is asked - and a user should pick the right answer. 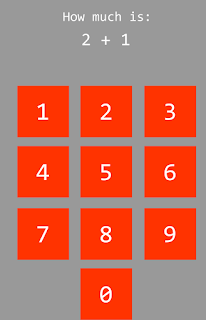 In case a mistake is made - we offer a user try again. The results are calculated. 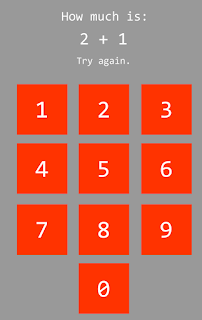 There are 3 sets of questions (10 questions in a set, 3 levels - Basic, Easy, Difficult). Once a user passes the first set of 10 questions - either a more complicated or an easier version of questions is asked. 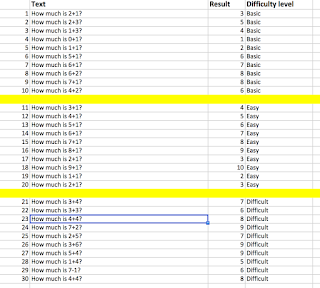 The results of the game are shown on the screen. A user is offered to save a file. Then - a simple .txt file is generated. In case a user wants to play again - a new game will be served. Based on performance in the first game - either a more complicated or a more easy set of questions is served. 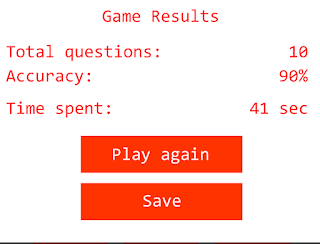 The results in the text file can then be used for interpretation and analysis. They'll be used to validate or invalidate the 2 main hypothesis I made when building the prototype. 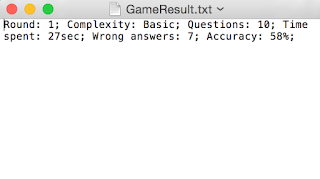 The final class diagram was generated directed from the code using a free trial of Crocus Modeller. 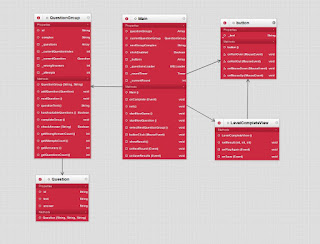