During the testing session we were given a chance to watch mates’ video prototypes and present our own ones. As part of this session - my video prototype of the maths game for kids - was also evaluated.
The Procedure
I asked the test participants to watch the video and then complete a short survey (created with the help of Google Forms) comprising 5 questions:

Before watching the video, I told the participants that they could pause the video any time and replay it if needed.
Survey Participants
9 people participated in my survey. All of them followed the procedure, since it was fairly simple.
Outcomes
Here are the results I got - they’re presented in the Google Sheets document: 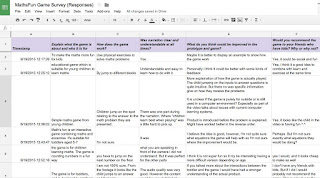 A full summary of the results can be found here.


Survey Effectiveness
In general, survey participants understood what the concept was about. But there were people who didn’t quite get the technical part behind the idea. One of things I could do - is elaborate more on the technical side, as a few participants were left wondering of how it actually works from the technical side.
Notwithstanding some changes that are to be made, people like the idea of the game and find it really useful. So, all I need it to improve it take into consideration great feedbacks and suggestions provided by test participants.
I'm glad I've used open questions to understand if the ideas was clear to survey participants, as it did show what people actually understood.
Constraints
There were 2 main constraints:
1. Time.
As usual - in this world we're limited by resources. In a similar way, I wish I could come up with a better quality of video given more time to learn and practice.
Idea for my future testing sessions: plan the number of survey participants and make sure each one has enough time to provide his/her feedback.
2. Skills.
I am not a professional designer, so - working on the video was time consuming and my skills were the main constraint I had.
Idea for my future testing sessions: that’ll be great to ask more people as the more feedbacks you get, the better product you’ll have in the end.
Implications
Since my concept is a good idea, I guess I'll stick to it in the future Specifically, I will concentrate on explaining more clearly what the game is about and how to play it and perhaps, cover the technical side of it more. Probably I will add some examples, and also think about refining the voice and text version of the video prototype.
As for the implications for future testing sessions, I will definitely continue using Google Forms for surveys. Additionally, I will provide survey participants with some sheets of paper so that they may take notes while watching videos. Besides, I’ll try to talk to more people in order to get more feedbacks.
Posted by Unknown at 17:47